First there was Saga (Canada), then yesterday we had Saga (Portugal), and now today we finish the saga with another band from Sweden!

Actually this Swedish version was the first of the bunch - their album being released in 1974 whereas the Portuguese outfit didn't cut theirs until 1976, and Saga from Canada didn't even start at all until 1977, but kept going the longest (though Saga Sweden have now reformed with the original line up, and are due to play their 1974 eponymous album in its entirety, plus some new stuff, at the three-day Melloboat Festival: http://www.melloboat.se/en/, which sets sail from Frihamnen in Stockholm on the 6th of September 2013.

Saga Sweden's leader is Christer Stålbrandt, who was previously with Swedish power trio November, a band which was formed in the suburbs of Stockholm in the late 60's, evolving out of two groups, Train and The Imps. UK blues/rock guitarist Snowy White was with the group for a few months, and they cut four decent hard/blues rock albums before splitting up at the beginning of 1972, and the formation of Saga got now Christer a chance to play the songs he wrote for November, but which didn't fit that band's style of playing. The music of Saga is more poetic and tends to be in a somewhat symphonic direction, including the use of piano, cello and saxophone.

This is from a music blogspot (translated from Russian):

The album is a very unusual and offbeat mix of hypnotic guitar-acid sound waves and mystically mesmerizing vocals. Unsteady harmonic vibrations generated by the creative impulse of the group's leader bassist Stalbrandta Christer (Christer Stalbrandt) gently envelop soluble in the vast ocean of the universe and gradually refusing to resist the inexorable laws of intergalactic space consciousness. Viscous and melancholic singing Swedish- Christer and disturbing sounds sad and enlightened cello Bjorn Isfelta (Björn Isfält) created while listening to the album a real sense of belonging emotional experiences of the authors of music and carry the listener into a fantastic and full of unforeseen danger and adventure, journey into the world of animated echoes of ancient Scandinavian sagas and sagas passed through the black-and-white prism of modern perceptions of reality in all its manifestations, not children.

A delightful drive and is definitely one of the best rock albums of the Scandinavian 70 's. 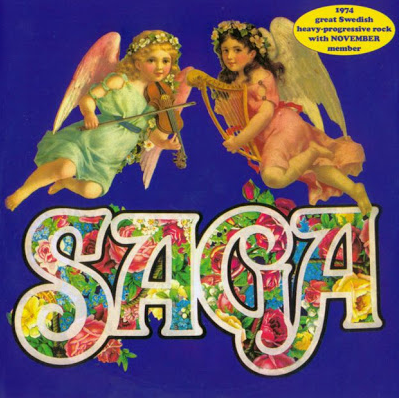 The only, eponymous album of this Fantastic Swedish quartet was released by Sonet Records in 1974 and is often considered as one of the very best Swedish records of mid-70’s era.

SAGA were formed by Christer Stålbrandt (the leader of great, heavy progressive band November) and represented a further development of the style prevalent on 2nd and 3rd November albums. The new band had an expanded range of instruments (including cello, piano and soprano sax) and more accomplished compositions (with great results), although it was still guitar-based, raw and very intense heavy progressive music (sung in Swedish).

*Awesome gig, the band debuted two new songs as well as playing most of their debut album and all four songs from last years EP.

Christer Stålbrandt is truly a legend among legends, and the other guys in the band including guitarist extraordinaire Mats Norrefalk are mindblowingly tight. Probably the best “opening act” I have ever seen in my life.